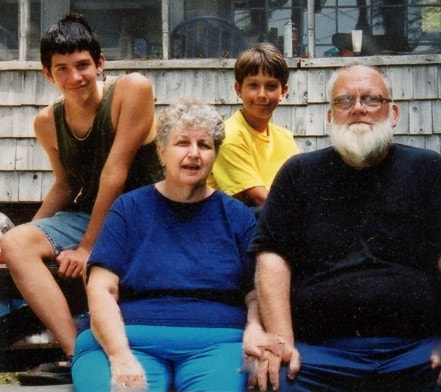 Joe Beggs was born on October 29, 1944. As a boy, Joe was a scout who loved the outdoors. As an adult, he became an avid fisherman and hunter.
Julie Beggs was born on February 3, 1943.  She was a compassionate individual who dedicated her life to nursing.
Joe & Julie were married on June 5, 1965.  One of their greatest joys in life was spending time at their camp on Spectacle Pond.  In 2010, Joe & Julie Beggs offered to have their camp become the Memorial Scout Camp at Spectacle Pond. Joe passed away on July 10, 2013 and Julie passed away on March 31, 2022.
Shortly after Joe Beggs' death, the board of directors of the Memorial Scout Camp decided to rededicate the organization in his memory, alongside Adam Beggs and Craig Goodwin. The waterfront program area at the Memorial Scout Camp at Spectacle Pond was named the Joe Beggs Waterfront in his memory.  In order to further his legacy, each year the MSC awards the Joe Beggs Campership to a scout who is a true outdoorsman, who has a background in nature / ecology, and is conservation minded.
In July of 2022, the MSC decided that it would be fitting to add a memoriam to Julie Beggs.  Julie's name will be added to the Memorial Wall in the cabin at the camp.  The "Julie Beggs First Aid Station" will be established at the camp.  In order to further her legacy, the MSC will establish the Julie Beggs Campership in 2023.  The campership will be awarded to a scout who "Exemplifies A Caring Attitude For The Wellbeing Of Others And Has A Proven Interest In First Aid, Nursing, Or A Medical Profession".